How Axemurderess Saved My Life

On the 10th of October Axemurderess saved my life. I didn’t know she did until recently, when I learned that the creepy pedophile who prefers Jews to couchsurf with him that insisted I stay with him has erased all traces of his CS profile…

The story begins when I was locked out of my house for the night and the sun had set hours before. Stranded in Berlin without internet my options were numbered. I knocked on all the neighbors doors to offer them the beer and bratwursts I bought for my hosts but no one answered. So there I was, alone, with a six pack some wieners and my day pack trying to wrap my head around the situation I was forced into. Thank God I bought a cell phone that day.

My contacts list was so short that they all fit on my little German talkie’s square screen simultaneously. I had less than five friends in Berlin and none could rescue me from October homelessness. So I reunited with the three girls that I hitchhiked with on my way from Hannover to Berlin at a bar on the other side of the city to take the edge off my nerves. I gave a beer to some guy I met on the tube. And my bratwurst was warm and squishy by then. I was… not happy, as you might guess. When I got to the bar I tapped into its wifi and sent out an Emergency Couch Request to all Berlin members. And that’s when BJ-M and Axemurderess messaged me.

Let’s begin with dissecting what a stay with 47 year-old BJ-M in his “cute” studio apartment entailed. Here’s his accommodation requirements as best I can remember:

1.) No sleeping in street clothes. Then it said if you don’t have pajamas he will lend you some of his own.

2.) You MUST turn off your cell phone at night.

3.) Only available sleeping space is in his bed.

On the continuum of creepy, if BJ-M is on the far right side, Axemurderess was somewhere in the middle. So still creepy but not “wear my pajamas boy!” creepy. But remember… she’s still creepy. You’ll see. So I didn’t respond to BJ-M out of fondle fear but instead I hedged my bets with the Axemurderess. A wise choice. AXEMURDERESS. What the hell was I thinking?

Eventually I found my way back across Berlin to her lair. She invited me in and we quickly demolished what remained of my six pack and half of her stock. Then, just when I was almost convinced Axemurderess wasn’t going to hack off my limbs in the night she did something that moved her closer to BJ-M on the creepy continuum.

She asked me if I wanted to see her scar. I said yes. I’m a man, men like scars. Then she took off her shirt and slid her bra off to show me the 3 inch scar cutting across her nipple. The left one if you were wondering. I don’t know how Axemurderess got her name, but it’s not because she has looks that kill or a body to die for.

Trying to erase a haunting image from my mind I turned the music up and a mini dance party erupted. So there we were, the two of us, in our own little dance worlds, jiving to some Norwegian hipster beats. And just when I thought, AGAIN, that Axemurderess was almost normal, she did it again. This time with a pink bunny onezee and a little pinch of sexual assault.

“Look out! I’m BJ-M!” she said! And with pulsating butt squeezing hand clenches and hot fiery eyes and a crooked smile she boogied towards my little ass. “No! Stop it! Get away!” I cried in a very coy fashion. Trying to box her out with my chest and get my ass as far away from her go-go gadget arms with extendable butt cupping claws. I thought about shoving her away and defending myself, but… I still needed a roof for the night. So I had to bear the ass grabs and play along until her claws released me from her sexual torment.

Axemurderess obviously didn’t kill me. And after that first night I spent two more with here without any more incidents. But even safe and sound away from BJ-M he continued to haunt me.

I neglected to respond to his “rescue” message so he sent me a follow up message. He said, “You read my message. And no response. Enjoy.”… Being the courteous gentleman I am I apologized for not responding. Besides his showing up on my pedophile radar, the truth is that connection to the internet comes and goes and is never guaranteed, specially when I leave the house all day to explore. Hours after sending BJ-M an apology there was a response in my inbox unlike any other message I’ve ever read.

“The reason I wrote you is because I assume you are a Nice Jewish Boy, and I would always want to help a Jew before I help anyone else.” He also said that if I’m still looking for a place to stay I should reread his profile, groups, and sleeping preferences carefully. And now, come to think of it, as I write this I’m remembering that I did look back over his profile and I think I saw he’s part of the Sexual Liberation/BDSM group! WTF!!! But that’s not all, the story gets even more twisted!

Once back home I told this story to my good friend. Wanting to show him BJ-M’s picture and Couchsurfing profile I found our old messages and tried to view his profile. It’s no longer accessible. My guess is that whoever BJ-M, assuming he really is a 47 year old white male named Barry, was keeping chained up in the basement finally escaped and found help.

Check out these characters. 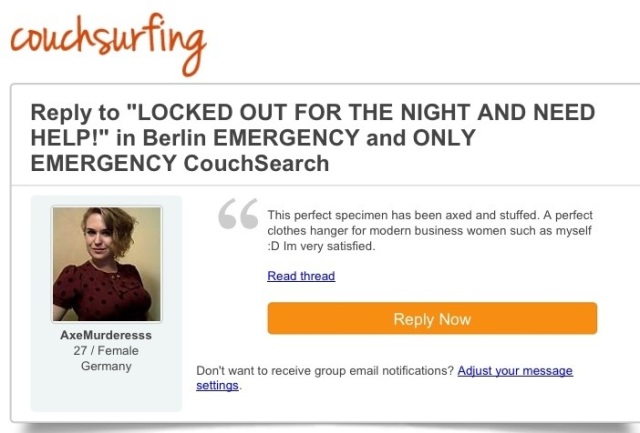 This is the first of many stories to come! Now that I have some downtime I hope to put up one story a week from my adventures abroad. If you liked this one PLEASE share it with someone you know or someone who’s become a little bit too creepy and needs some perspective! Thanks for the read!

Thanks for the read! Now share it with a traveler you know!

1 Response to How Axemurderess Saved My Life